Viola's Huge Heart Foundation is a San Antonio-based organization that was established by the Barrios family in 2008 in memory of their mother, Viola Barrios. The foundation is a not-for-profit 501(c)(3) organization. Viola's three adult children, Louis Barrios, Dr. Teresa Barrios Ogden, DPM, and Diana Barrios-Trevino make up the foundation's board of directors. They serve strictly as volunteers in all of the activities of the Foundation.

The Board of Directors

Viola Barrios' three children direct her foundation, just as she directed their life paths. All of them chose to follow her lead into service to others. The board of directors is made up of Louis Barrios, president; Teresa Barrios Odgen, DPM; and Diana Barrios- Treviño. The Board sets policy, priorities, goals and strategies. All members volunteer their time to fulfill their responsibilities to the Foundation. 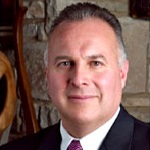 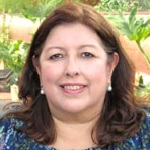 Many are the opportunities to change the course of a life by lending a helping hand.

Viola Barrios' history of entrepreneurship and personal charity guided the creation of the foundation in her name. Immediately after Viola Barrios' death in April 2008, her children, Louis, Diana and Teresa, established Viola's Huge Heart Foundation in her honor. Their purpose was to continue the work that was so important to her in life: enabling people to help themselves. Early in life in her hometown of Bustamante, Mexico, Viola saw two human conditions that stayed with her for life. Much of humanity is born to a life of disadvantage and even destitution. But the spirit to rise above it is the driving force for personal achievement. Out of these observations came her conviction that many are the opportunities to change the course of a life by lending a helping hand. The difference she made in the lives of others was profound because, without hesitation, she addressed the opportunity when she saw the need to help.

Devoutly Catholic, her unselfish generosity was the expression of her belief in the practice of Christian Charity, as the highest form of love for our fellow men, women and children. Her children and the beneficiaries of her donations attributed to her a huge, generous heart. That is how the foundation came to be named Viola's Huge Heart Foundation.

The Foundation, therefore, is the continuation of her charity. It raises money and serves as a direct channel for donors who wish to enrich their community by funding the education of talented and academically ready, hard-working young people. Foundation scholarships give them the opportunity to live up to their academic potential without being affected by their family's financial circumstances. It's a helping hand that can be multiplied many times because many are the opportunities so near us.

After the death of her husband José in 1975, Viola became the sole breadwinner for their children: Teresa, who was 17; Louis, who was 15; and Diana, who was 12. Her most marketable skill was the culinary art she began cultivating as a young child, first by observing and later by assisting her mother, her grandmothers and her aunts in preparing daily and special-occasion meals. Viola staked her start in business with $3,000—that's all she wanted to risk—plus her hard work, on her belief that other people would love her home-style Mexican food as much as her own family did. In 1979 she cobbled together some mismatched tables and chairs, equipped a kitchen and opened a little restaurant in an old building at 1033 Avenue B and Jones Street downtown. Despite its many shortcomings, including ramshackle decor and scarcity of available parking, San Antonio beat a path to the door.

Diana remarked later that her mother set high standards for her cuisine, "knowing that when your ambiance is humble, the food had better be good." The fact that Viola managed to relocate Los Barrios a few months later to a former Dairy Queen on Blanco Road north of downtown speaks volumes about the quality of the food.

Today, the restaurant bears no resemblance to its former life as a Dairy Queen. With Viola, Louis and Diana working as a team, the décor was transformed, and the building was artfully enlarged several times to accommodate the overflow crowds of Tex-Mex food lovers. In growing numbers they queued up to join the noontime and evening devotees. In the early 1980s, "Esquire" magazine named the restaurant "One of the best new restaurants in America." Three times, Los Barrios made "Hispanic" magazine's list of best Hispanic restaurants in the country. In 2004, the family opened a sister restaurant, La Hacienda de Los Barrios on Redland Road north of town.

In early 2008, with much anticipation by the Barrios family, construction on a brand new and much deserved new house for Viola was almost finished. The new home was built next door to her daughter Diana’s house. She never moved into that home. She moved into a heavenly mansion. On April 23, 2008, an intruder broke into Viola's house. Viola lost her life. Louis, Diana and Teresa lost their mother. Customers lost a beloved restaurateur. San Antonio lost an extraordinary woman.

From the darkness of tragedy came light. Louie professed forgiveness for the young man charged with his mother's murder. His sisters did the same. The electronic media carried the story and the San Antonio Express-News ran this front page headline: "Spirit of Forgiveness."

The family's response moved the city and left thousands in awe. In the midst of their grief, Louis, Diana and Teresa created a foundation to help women, especially young girls, who are facing major obstacles. Today, Viola's Huge Heart Foundation awards full scholarships every year to select academic achievers with a heart for service.

The first two award recipients were in 2009 and 2011. Learn more about them below. 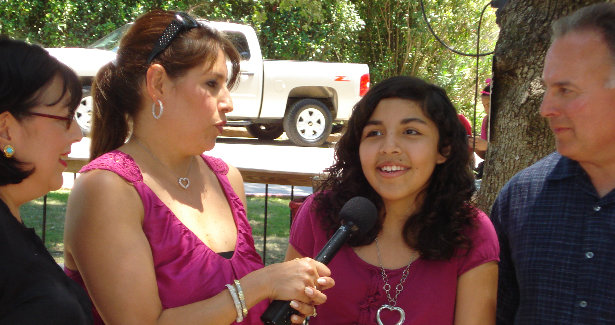 A key Foundation field of interest is providing financial assistance for educational study. Just before the foundation awarded its first scholarship in 2009, the Barrios were working on another project with Incarnate Word where Louis' sisters Diana and Teresa and his nieces went to high school. "Maybe we'll award a scholarship to someone," Diana Barrios-Trevino casually remarked. "Four months later, we get this young girl's resume," Diana said. The girl was Abigail Issarrasras, and she could not have been better qualified for the board's first award. "She was valedictorian at Little Flower Elementary School. Her teacher said she was the finest student Little Flower ever had. She had been accepted into Incarnate Word, but she couldn't take advantage of it because of her family's limited financial means. She was being raised by a single mom."

Diana points out the poignancy of Abigail's background. "Our mother raised us as a single mom after the death of our father in 1975, and Teresa was valedictorian at Saint Cecilia's in 1972. Our mother would have loved to help this young girl. The foundation awarded her its first four-year, all-paid scholarship.

The scholarship award was the beginning of a long-term campaign the Viola's Huge Heart Foundation has launched to continue the philanthropic work of Viola Barrios. 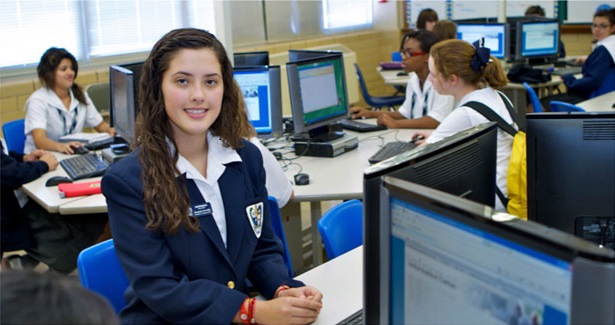 On June 15, 2011, the young Viola's Huge Heart Foundation reached it's second historic milestone for a young foundation (Its first milestone was the awarding of it first scholarship). It awarded its second private high school scholarship to 15-year-old Daniela Portillo. Set with a full scholarship, Portillo entered Providence High School, a private Catholic high school in San Antonio, as a sophomore in the fall semester of 2011 and is now on course to obtain and take with her a quality high school education that will open her educational future. That's what Providence produces with a quality education—graduates that are headed for college.

Portillo was selected on the basis of her personal qualities and her commitment to her education. The Barrios family calls the scholarship recipients "Little Violas" as the young ladies exhibit the same hard-working and lovely qualities personified by the late restaurateur Viola Barrios. The Foundation awarded its first full scholarship to Abigail Issarraras, now a junior at Incarnate Word High School. The scholarships support young ladies who are academically qualified but who face financial constraints that prevent them from pursing a high-quality education to prepare them for high achievement. The Scholarships are designed to underwrite in full their education through high school.

Viola's Huge Heart Foundation is advised by these businesses: